In California when you have been involved in a car accident, it is important to understand your legal rights. California employs a comparative negligence system by which a plaintiff can recover from any at-fault defendant regardless of whether his or her own proportion of fault is higher than 51%. California follows a system to award damages to victims in auto accidents and other tort cases. One of the most common defenses that defendants will raise, especially in personal injury cases, is that it was actually the plaintiff who was at fault in causing his or her own injuries. There may be truth to this argument, or it may be just a ploy to intimidate the victim into not seeking recovery or into accepting a lower payment. In many states, plaintiffs who are over 50% or 51% at fault in causing the accident cannot recover at all from the defendant.

Li v. Yellow Cab Co., is a California Supreme Court case that set precedent for the doctrine of pure comparative negligence in California tort law, rejecting strict contributory negligence. Li (P) was struck by a cab driver for Yellow Cab Co. (D) as she was crossing three lanes of traffic to enter a gas station. The cab driver had been driving too fast and had run a yellow light. Li brought her lawsuit to recover for personal injuries and damages arising from the accident. The trial court entered a judgment barring damages for Li on the grounds that she had been contributory negligent.

Currently, there are 13 states that use a pure comparative negligence system of recovery. They are listed as follows:

How Does Comparative Negligence Work?

If you are injured in a car accident in California due to the negligence of someone else, you may be entitled to recovery of money damages in connection with your injuries and property damage or loss, even if the defendant or defendants claim that you were at least partly or even mostly at fault for what happened. For example, if a plaintiff’s total damages are $100,000, and the plaintiff is 25% at fault, the plaintiff can recover $75,000 of the damages and will be responsible for $25,000. Even if the plaintiff is 99% responsible for the accident, he or she can recover 1% of the damages. You should speak to a California personal injury lawyer to help review your case, if you have been involved in a car accident.

Four examples of this law are listed below:

Example 1
Paterson is swerving back-and-forth on a busy street. Hakim speeds up, exceeding the speed limit, to try to pass the swerving driver. Paterson smashes into the speeding driver. The swerving driver is likely the more at fault. However, Paterson could argue that he would not have crashed into Hakim’s car had Hakim not been speeding. That is a critical decision because the injured plaintiff’s recovery would reduced by his or her percentage of fault.

Example 2
Simon is drunk and is speeding on the highway at night. Gabriel is driving the speed limit, but his headlights are not on. Simon crashes into Gabriel’s car with no headlights on. Whatever percentage a jury decides based on the evidence it hears will be used to reduce the prevailing plaintiff’s recovery. If both drivers are hurt and sue each other, each would recover damages, having the full measure of his damages reduced by his or her percentage of fault as determined by the jury.

Example 3
Jackie rolls through a stop sign at an intersection and is hit by Kevin, who is speeding in the opposite direction. Kevin sues Jackie for his medical bills and the cost of repairs to his vehicle. Jackie counterclaims for her medical bills and the property damage. At the trial for this t-bone accident lawsuit, the jury determines that Kevin’s damages are $40,000 and Jackie’s damages are $100,000. But they also determine that Jackie is 75% at fault for the accident. Kevin is only 25% responsible. As a result, Jackie is entitled to collect $25,000 from Kevin (25% of $100,000). But Kevin is entitled to collect $30,000 from Jackie (75% of $40,000). 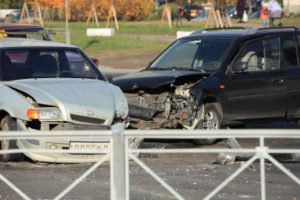 Victims involved in auto accidents should understand the system of recovery used in their jurisdiction, because a particular system may have a significant impact on their award. The different systems in practice include:

2) In some modified comparative negligence states, a plaintiff will not recover if the jury determines he or she is equally responsible (50%) or more for an accident.

3) In other modified comparative negligence states, a plaintiff will not recover if he or she is found more responsible (51% or more) than the defendant. There may be variations on this rule. 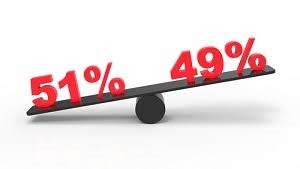